No Bikes Allowed at Cardiovascular Center

Please read my license notice before copying my photos.

Car drivers get free valet parking but bikes are on their own at the new Cardiovascular Center at the University of Michigan. 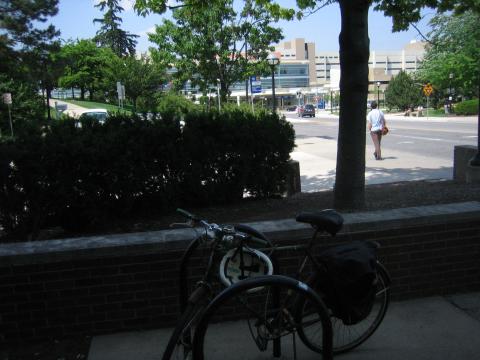 When I asked where to park, I was directed to the bike racks at Alice Lloyd Hall. You can see the Cardiovascular Center in the background, about a block away. While this isn't terribly far, it's inconvenient for a number of reasons. First, it's not at all obvious that this is where you should go. It is not visible from the Center, and the staffer I asked had to check with his supervisor to find out where it was. Another staffer at the Information Desk had no idea where to park. Second, this rack is always full during the school year. It's not covered, so it's useless in the winter. It's not a long walk but requires at least two street crossings at the nearby roundabout. 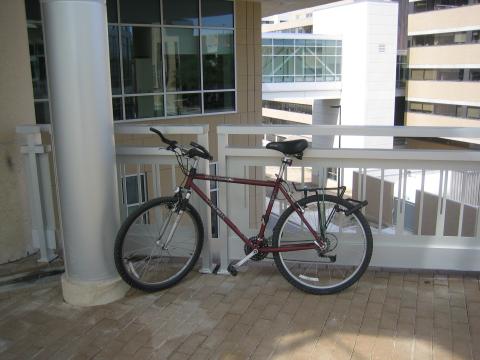 When I visited, there were a few bicyclists milling around looking for parking. Several locked their bikes to handrails. This is a bad idea. The handrails are often needed by people with limited mobility or are next to fire lanes. The University officially discourages using handrails and has been known to remove bikes locked to them. Some bikes were locked to lampposts but there weren't enough posts to go around, and this is impolite to people trying to get out of their cars.

I found this pamphlet from the American Heart Association in the Wellness Resource Center at the Cardiovascular Center. It "suggests activities such as... bicycling" for a healthy heart.

Does the University endorse this suggestion from the AHA? I sent this letter to one of the Directors of the Center to find out.

I was very impressed with the new Cardiovascular Center at the open house today, but one thing seemed very odd. Why is there no bicycle parking at the front door? I found a brochure from the American Heart Association in your Wellness Resource Center that recommends bicycling as a good exercise for a healthy heart. Does the University endorse this recommendation? If so, why does it discourage bicycling at the Cardiovascular Center?

I got a prompt reply but it wasn't very satisfying. Dr. Eagle apparently thinks there are already bike racks "very near by" but he must not have actually looked, because there are not (see my photos above). And I don't understand why the University would automatically provide convenient car parking, but must "explore" the "possibility" of putting in bike racks.

This letter seems like a complete brush-off to me.

Thank you so much for your letter dated June 7, 2007 regarding the Cardiovascular Center. There are a number of spaces very near by the Cardiovascular Center for bicycles to be stored. The University of Michigan Health System and all its entities strongly encourage bicycle riding. Let me explore whether or not there is any possibility of adding bicycle racks at the main entrance or whether we would prefer to have our bicycle riders store their bicycles at other conveniently located bicycle parking spaces.

Sincerely yours, Kim A. Eagle, M.D.

I'm not sure what he means by "conveniently located." Several people have suggested using the racks by the back door. These racks are four blocks from the front door and down a steep hill, which is not at all convenient.