The Flame Goes Out

Last night I made last call at the Flame for the final time. Having lost their lease, they will be moving to the old Liberty Bar space. But it won't be the same.

The Flame has a long history behind it. My dad used to drink there when he was a student at UM. Back then it was known as "Custer's Last Stand," after the large painting behind the bar (now long gone). When I was in junior high school, a number of the teachers were known, or at least rumored, to be regulars there. And in high school, along with the Derby and the Liberty, it was on the "dare you to go in and order a drink" list. But as we all turned 18, we discovered that it was really a friendly place, known for its loose age checks and late last calls.

It was always a favorite with restaurant workers, who could often get off work at night just in time to get a drink at the Flame. One year ago last night, a friend and I celebrated his birthday by doing the rounds of the late bars, hitting each just in time for last call. Any such tour will end up at the Flame, especially in these final days, when enforcement of the rules was even more lax than usual. 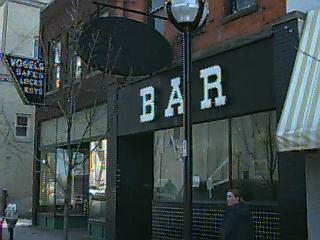 The place had been going downhill in recent months. The windows were broken, the neon tubes removed from the sign. The individual jukebox control boxes at each booth disappeared a couple of years ago. This last winter, the furnace broke and wasn't fixed, so they moved in a kerosene heater. On the coldest nights customers would huddle around the stove, laughing and drinking. Last week the booths were removed.

But last night the place was jam packed. There was cake, food, and beer, a drag queen beauty show, and an auction of memorabilia. There was a group of bartenders from the Old Town, waitresses from the Bella Ciao, and musicians from all over. As I sat at the bar chatting with a Fleetwood waitress, the beer bottles piled up, the staff not bothering to remove the empties. Three bartenders were really hustling, running from cash register to fridge to keep up with the demand for beer.

As I sit here in the comfort and safety of the Fleetwood writing this up, I can count on the fingers of one hand the real, down to earth bars remaining in this town. I'm hoping the new Flame will be as good as the old. From here I can see that the front window "FLAME" neon has been moved and is glowing invitingly. It remains to be seen whether the swooping arrow neon will also move to the new location.